Are you ready for the holidays or are you like me, doing last minute shopping and meal planning? In the midst of last minute activities, it seems like I’m bombarded by “last chance” emails, ads and signs everywhere I look. Today, I’m pondering “last chances” – of which there really are very few in life, and “second chances” – what we gift to ourselves and others when make new choices. 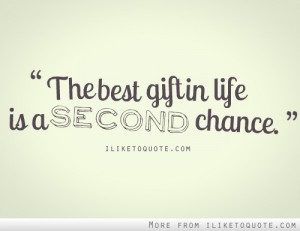 When you think about it for a minute, there are truly very few things in life that are last chances…. But if we end up missing a last chance at something important, it can be really hard to let go of feelings of regret and move on… and in looking back, we can easily end up missing second chances that are right there in front of us now. In this article, I’ll share with you 3 ways to shift out of last chanc-ing.

The problem with last chance thinking and acting is twofold and it runs on a very powerful emotion-based program.

Here is the problem with last-chances: 1) they prey on our tendency toward impulsivity, bypassing the higher-brain processes of reason and logic and, 2) they pull at our heart-strings, typically in ways that deplete our energy… as in “I should do x, y, or z, or else….”

This is because “last chances” are tied into old wired-in emotional patterns of fear and regret. Fear and regret are very powerful because they keep us looking backward at the past and/or lock us into anxiety about the future never presenting us with an opportunity again.

When we dissect it this way, it’s easy to see how dysfunctional last chance thinking and acting really is! 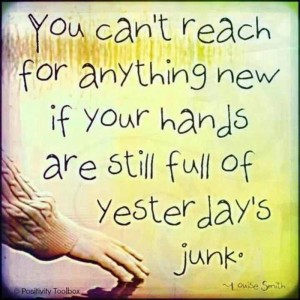 Here is a personal example I just experienced. My younger brother, John, today is happy, well-adjusted, employed and in a committed relationship. Five years ago, he was homeless, alone and literally wandering in the desert in Arizona. I didn’t know if he was alive or dead. He had been missing for about 3 years. The last time I saw him was in 2007 when I left him at a rehab center for indigent people. He had spiraled into alcoholism after our mom died in 2002 and his wife left him. He had run out of “one last chances” with me as I had learned how to stop enabling his addiction.

A few years later in 2010, I was playing the Radical Forgiveness game called “Satori” that is featured in my film, Sacred Journey of the Heart.  Satori is a board game created by Colin Tipping, that takes the players through all 5 steps of Radical Forgiveness that I depict in the film. Playing the game results in reframing issues to a new perspective that literally shifts reality in small and sometimes huge ways.

Each player “randomly” selects an issue from a stack of cards and plays the game around that particular issue. The card I picked for the game that day in 2010 was “Alcohol and Drugs have affected your life” and the context was Family. So obviously, I was being led to dive deep into Radical Forgiveness about my brother John’s alcoholism.  It was one of the toughest games of Satori I ever played. Through the process, I was able to look at how I still blamed myself for not doing enough for him, not just through his addiction, but when we were growing up and I was trying to fill in for an absent dad and a stressed out mom who had gone to back to school to get her master’s degree after her divorce. I was able to shift into a new perspective about the events around his addiction and see what the experience did “for” me vs “to” me. It helped me untangle my lack of self-forgiveness and enter into deep forgiveness for my brother and through him, for myself.

Literally 10 days after I played the Satori game in August 2010, my brother was found in the desert, brought back to our hometown in the Midwest and entered into a very strict rehab program. All he had to his name was a change of clothes. He didn’t even have an ID card. Less than 10% of the people entering the rehab program complete it. My brother was one of the successful graduates.

Today, he is sober, he has rebuilt his life, he has a good job and he is living in a committed and happy relationship. It is a miracle that was built on radical forgiveness, his hard work, the support of many people and the second chance he received to start again.

The other day he called to ask me for a recipe of one of our mom’s favorite holiday breakfast casseroles. I told him it was in the 3-ring binder book that my mom gave to each one of us before she died.  The book contained her favorite recipes, favorite poems and the original artwork and poetry she created as she was dying from brain cancer. It was a gift we all cherished because it contained so many fond memories and her expressions of love which came through her cooking, poetry and art.

John reminded me that he had lost the book of our mom’s precious gift. I said to myself, “Ah! That’s right! He had literally lost every single thing he owned from his past.”

Of course, I emailed him the recipe right away but in that moment, I knew what to give my brother this Christmas.  One by one, I copied each page from the 3 ring binder book from our mother. The recipes are in black and white, the artwork and poetry are in color – about 250 pieces of paper and several hours of my time were spent in gratitude that my mom left us such an amazing gift. And in deep gratitude that my brother had not at all “lost” this part of his past:  the legacy of love from our mom that I could give back to him.

I believe that there are always second chances for love. Radical Forgiveness opened my heart in 2010 and I got my brother back. And my brother is getting the gift from our mother back!

I’ve continued my exploration of emotions and the brain, the heart and the mind since 2010. I’ve discovered that doing the HeartMath program, Voyage to Heart Intelligence, activates the power of our hearts and creates many second chances for love and great moment-to-moment connections with the present moment.

I will be comparing all three programs next Monday, December 29th 2014 at 5 pm Mountain time. My primary focus will be Brain Tek – if you’ve missed my other free webinars, here’s your second chance to learn how to permanently change old patterns and give yourself the gift of living in the present!

For information on how to join the free webinar email: ronna@sacredjourneyoftheheart.com