Rattlesnakes on the path – 3 strategies to removing any barriers

Springtime in Arizona means much needed rain, wildflower blooms and…. Rattlesnakes coming out of hibernation to warm up in the sun. One of my favorite activities is biking in the desert at all times of year.  Each season has its challenges in the desert but the biggest one for me is encountering rattlesnakes on the path.  This happened to me yesterday and I realized I now have 3 choices about snakes on the path or any barrier for that matter.

I had carefully chosen my route because we have had a very high amount of rainfall this spring and that means we have a massive amount of wildflowers and other plants encroaching on the trials. Knowing that my usual bike route would be too overgrown with plants to see rattlesnakes, I chose to ride in a different part of the nature preserve where I knew the paths were wider and I would have a clear line of sight to the path ahead.

I had almost reached the farthest point out on the trail where it would curve around and head back, when up ahead, I saw something looking like a long stick across the path.  This meant slow down, approach slowly and be cautious! As I approached I could see it was about a 4 foot rattler stretched across the path with its rattle up! 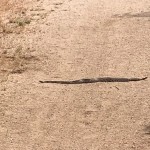 This is the rattler I met on the path yesterday!

If you’ve followed my ramblings for a few years, you may recall that rattlesnakes have been a big, huge phobia of mine since I was 13 years old.  I developed this phobia because we spent that summer in Wyoming farming  with my grandfather.  It was a very dry summer which meant that all the rattlesnakes were coming down to the irrigation wells to get water.

At the time, there were no cell phones for emergencies. My 15 year old sister I would get dropped off in the beet fields in the early morning to hoe weeds and then we’d get picked up by noon before it got too hot to work.  This meant that if we had a rattlesnake encounter, there was nothing we could do other than wait or have one of us walk the 5 miles to the farmhouse to get help.  Obviously, this scared the bejesus out of us! After 4 different rattlesnake sightings, our parents realized that it wasn’t safe for us anymore to go out alone into the field. So for the next few days, our dad went with us. On both of those days, he ended up killing rattlesnakes with his hoe in the field.

The final straw was when I sat down on the irrigation ditch to get a drink of water and when I stood up, I realized that right under me was a baby rattler.  Apparently, the babies have more concentrated venom than the adults. At that point, we were relieved from hoeing duty and got the rest of the summer off.

You can imagine that as a result of these real, dangerous encounters, I developed a nervous system panic response anytime I see a snake.  In 2013, I had the privilege of interviewing Nick Ortner producer of the film The Tapping Solution for a telesummit I hosted.  In preparation for the summit, I watched Nick’s film and there was a big segment on helping a woman overcome her fear of snakes. I went into a panic just seeing the snake on the screen so I realized that it was time to deal with my fear of snakes. I did a lot of tapping on my fear about snakes for a few days… and wouldn’t you know, the morning that I was scheduled to interview Nick, I went running in the desert and encountered a rattlesnake!  I had the same panic reaction initially but I started tapping and cleared it out of my nervous system right away.  If you’d like to hear my interview with Nick where he explains all about tapping, please contact me: ronna@sacredjourneyoftheheart.com

Fast forward to yesterday, I didn’t even panic when I saw the rattlesnake! I was alert but not hyper-vigilant.  I think it’s because I’ve continued tapping over the years and continued to shift out old fears and stuck emotions.

So basically, as I stood beside my bike about 20 yards away from the sun-basking snake, I realized I had three options: 1) throw a rock at the snake to get it to slither off the bike path, 2) go around the snake by going off the path (into the brush and hoping there were no other snakes I couldn’t see) or 3) turn around and go back the way I came instead of doing the loop.  I kind of wanted to take a selfie with the snake but I realized that this could end up on the news under the category of “stupid-human selfies” – just like the woman who got attacked at the Phoenix zoo on March 10th  for crossing a zoo barrier to get a selfie with a black panther.  So that option was out.

The choice I made yesterday was to just turn around and go back the way I came. Of the three options, this seemed the best. After all, I was in the rattlesnake’s habitat, not the other way around. So I decided I didn’t need to disturb its sunning activity.  (And I had a tiny fear that it might chase me down! Yes, a bit of left over amygdala response!)  And it didn’t seem prudent to go around the snake just in case its snake family was nearby.  So I turned around and headed home.

(FYI: The amygdala is part of the limbic system of the brain, which is involved with emotions and other reactions to stimuli. The amygdala is a processing center that is hooked up to receive incoming messages from our senses and our internal organs. Usually when our amygdala is stimulated, we make decisions we regret later OR we stay in a state of alert or shock for a long time.)

I realize today that we always have these three basic choices whenever we are confronted with a barrier in our path. If we can take the panic and frustration out of the equation, and any other amygdala-type reactions, we have the best chance of making a good decision.

Today, I use quite a few tools to manage my response to challenges: tapping or EFT to shift the emotional response so it doesn’t get carried around or stuffed inside as chronic stress.  I use HeartMath tools such as the Freeze Frame to calm down and make true- heart centered (vs reactive) choices.  I use Radical Forgiveness if I discover that I’m holding on to some deep-seated or long-standing issues. And finally, I use my newest modality, hypnotherapy to rewire my conscious-subconscious interface to feel more at ease and empowered when I have a choice to make.

My point is, that when we encounter something uncomfortable on our path, we always have a choice. One of my specialties is being able to help my clients navigate challenges and barriers in life to come up with the best possible solutions that lead to a life of great ease and sense of empowerment.

I invite you to explore my client offerings and call me for a free consultation to determine which approach will be the best to help you move forward through any obstacle or barrier you encounter!